It's been two weeks already?

Did anyone miss me? Christmas-and-New-Years time somehow just flew past my head and I haven't had a chance to stop and write about the fabulous meals I've made, meals I've enjoyed, and most importantly, meals I've spent with family. Or about how drastically my daily life has changed in the last 13 days. So I'll just do a round up of all the stuff that's been going on.

I think it was on the 17th where I decided that enough was enough and my body just needed a break from the unnecessary stress I was putting on it. More, but still not enough food to cater for every bit of my body was just wearing it down, so I decided that from then til the Sunday (the 23rd), I'd not stress about what I ate (of course, I'd still be super paleo and stuff, but if I wanted a bite of bacon when I'd already had breakfast, I'd have it, for instance) and I'd do an entire week of yoga instead of super-crazy-hardcore pilates which was getting to my back and neck. The idea of it was to completely chill my body out and see if stress was the reason why my body was in the weird formation it was in. By the end of my very calm week, I'd definitely seen some change in how I thought and how my body looked and felt, but the only bad thing I got from it was that I didn't want to push myself through another pilates workout again! Stretching and moving slowly is so much more fun than double leg lifts. I've definitely dropped down on how often I do pilates now. Since that week, I've had a ton more energy and I'm so much more relaxed, it's crazy. Having that big week of calm really did change my outlook on bodily stress and I think I'll carry my little experience with me for quite some time.

The last two weeks (that was three weeks ago) I've finally come to the realisation that I have to actually eat far far more than what I have been in order to live. So apart from eating steaks nearly every day, I've looked into paleo, primal and Weston Price diets/lifestyles a lot more. The other day, I spent a good two hours watching this press conference/lecture thing by my hero, Sally Fallon, and oh my god it's life changing. Ok, well to me at least. But it really changed my perspective on how much animal products we need to eat, but more importantly, in the end, it doesn't matter what we eat but how we eat it, or how it was prepared. I'd now gladly eat a bowl of oatmeal made with dairy milk with a loaf of bread if the grains had been prepared for two weeks and the milk was raw. Stupid Australian pasteurisation laws! Anyway, how about I get onto the more fun stuff?

What have I made/cooked/eaten/prepared?
- Christmas feast. Oh my was that glorious! We had a thousand courses and plates were continuously taken off the table to make room for new ones. People left and came back at times to continue where they'd left off. Best of all, it was nearly all seafood! Actually maybe the best bit was how I was in the middle of the table. And I loved all of it. Except the oysters, I still need to work on those...
- Lots of steak. Lots and lots of big hunks of cow whacked on the barbie. We used my auntie's cow for this batch I've got the photo of, and eating that steak was like 'Holy cow that beef is good'. Probably because it had been brought up with sure love and care. Anyway, that dish was served with grilled capsicum and cucumber. I made some braised cucumbers before which was less than average (peeled, seeded chunks of cucumber fried a bit) but on the bbq like that, even mum agreed that they were really nice. 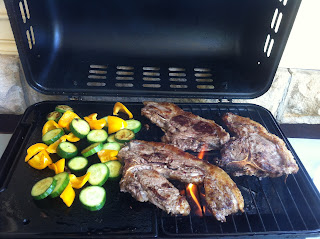 - more smoothies. This one turned a perfect shade of green as you can see. And there are no green veggies involved! To get a green smoothie without raw kale or anything like that, I sprinkled a bit of spirulina powder in there. I didn't think it would colour my smoothie that much! It was just a mango though, so I guess there weren't any other colours to 'overtake' it. And you couldn't taste it, which makes it a much bigger thumbs up. 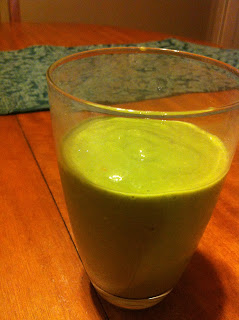 - I found a recipe for egg crepes here and I had a really clear picture of how to do it and how it should turn out. But I think I beat the eggs too much so they turned into slightly burnt omlette-souffle rounds of egg things. I will make these again and they will be crepey and not half an inch thick. 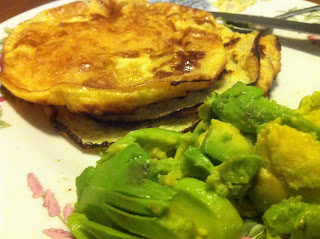 - I found this thing on pinterest where you top a burger pattie with a pineapple ring and some sauce and wrap it in bacon and fry it, so we thought we'd give it a shot. It seemed easy enough. But nooo our bacon is not made of plastic and it made itself very difficult to wrap. We used pineapple chunks instead of rings and we put some fresh herbs (parsley and oregano) in there instead of sauce. In the end, they did stay relatively bound with the help of skewers, and the herbs certainly made it a notch up from good. They were pretty awesome, but we won't be making them again in a hurry. 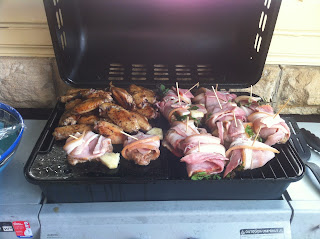 - I got some fresh almonds for Christmas so after I cracked them open and soaked them for I think it was 12 hours, I popped them in the blender and gave them a whirl until I had a nice... gloopy consistency? So I confusedly put it through a strainer (we haven't got any cheesecloth! I must get some) to find that it all just fell through. It didn't smell too fantastic and it didn't taste amazing either, and there wasn't much of it. I poured it all into a small measuring thing to cling wrap and put in the freezer to use for a smoothie or something, but when I tried to put a cling wrap lid on it, it tipped over and all my almond milk spilt everywhere! Disappointed obviously, but I did discover how easy it is to make almond milk. I'm going to have to try it when I actually have cheesecloth. 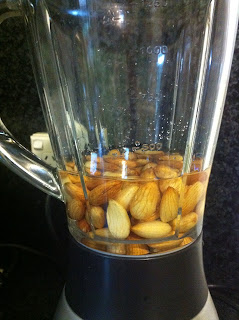 - to finish off, I'll show off my tiny dinner from last night. We had a big lunch so I wasn't particularly hungry for all that much. But we had a bunch of okra so I wanted to try cooking it. I fried it up with some leek (we have no onions), cumin, grated ginger and pepper, and a heap of coconut oil. I can't say that okra is my favourite veggie but it's really unique. It's like a normal veggie on the outside, but once you get to the slimy seeds it's like... tapioca pudding in a veggie? It's pretty cool like that, I reckon. Oh and in the mug I have some broth which was super salty. I have to start tasting stuff before I add salt to them! Oopsie. 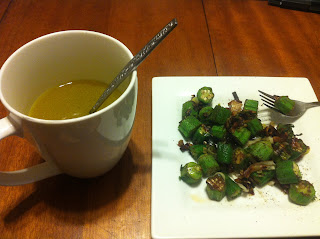 Ok, I know this sounds a bit out there but I will reset my goal of writing every second day, until the start of school. Because then I'm going to be up to my eyebrows in homework so writing here won't be the biggest priority. I don't know what I'll write about in two days time but I'll make it interesting!
Posted by Unknown