I have a legitimate reason for being away, I promise! I went for a drive up the coast for the week, for a half-holiday-half-collecting-stock trip. And boy, did we collect stock. Have a look at all these beauties: 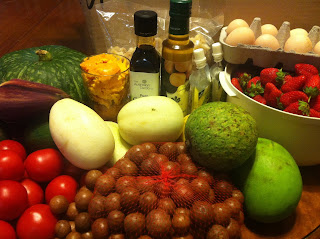 Going around, there's non-hydroponic tomatoes, two reed avocados (no more hass for me! These round reed ones are so much nicer), a small banana blossom, a potkin, three apple cucumbers, over a kilo of unshelled macadamias, a green mango to cook with, a green sapote, a few limes that didn't get in the picture, macadamia oil (I tried to get a big bottle but dad wouldn't let me), carob syrup, the glass is two chopped up yellow sapotes, some naked crystallised ginger, ginger puree, a load of strawberries, backyard leghorn eggs, and in the cardboard box which you can barely see behind all that, is FULL of bananas. It's a big stalk of bananas. At least 50 of them. I got other food on the way but they got eaten, such as a few more avocados and yellow sapotes, some carob coated dried bananas and a few more bananas.

The trip was pretty fun. I went surfing a bit and swimming around in the water when it wasn't cyclone weather. I also went on a crab catching cruise thing where they pulled out crabs from the traps, boiled them up and served them up to everyone half an hour later. And obviously that was really amazing. It's crab, so it can't get much better than that. There was one mouthful I had of that crab and I had this random idea of maybe trying crab with like a savoury (or sweet, with honey) lavender sauce. Can you even make a savoury lavender sauce? I could always try... Maybe I'll try cooking with lavender in a much safer way first. Like almond shortbread. Or lamb. Or tea or something.

I'll definitely do this stock-collecting trip again, probably multiple times over. And when I do, I'll come back to this post and collect my list of food I need to get, which I'll put right here.
- Grab a massive stalk of bananas from Cunningham's neat the Big Banana. They're yummier than a lot of other bananas (these ones are sub tropical, so they're sweeter) and super cheap in bulk.
- The Carobana place down the road from that has lots of carob stuff. I can never find carob, and their syrup is like chocolate but with a stairway of levels of flavours, with no added sugar! Or no added anything for that matter.
- Tropical Fruit World. Not so much for stock, but c'mon Jordie, you know you want to go there. Fill the basket to the brim with fruits you don't know the name of five seconds after you pick it up. You don't know what to do with it, you don't know how to eat it, you don't know when it's ripe, but just take it anyway and hope for the best. It's fruit, you can't go too wrong.
- Head on up to Maleny for some awesome, hippie, raw vegan-style country town life. Grab a bottle of almost real milk from Maley dairies and thank them for realising that the Australian government's dairy regulations are stupid.
- While you're up there, go to Coolum and see how many fish I can catch in 12 hours offshore. That should bring back stock, and sustainably-caught fish. (it's gotta be good is some way)
- Get some ginger from the Buderim Ginger Factory which isn't actually in Buderim (it's in Yadina). I think naked crystallised ginger is the one time I'll let myself eat cane sugar willy nilly, so pinch a few bags of 1kg factory seconds of it. Because why not. The rest of their ginger stuff is more sugary than that, and the ginger bits look so good when they boil in those vats of syrup for 12 days...
- And across the road from that there's a pretty big nut shop that sells bulk dried fruits and nuts and stuff like that. Walk across to the hidden side of the shop and grab the 5.3L macadamia oil bottle. It's only $17 per litre, which is half that anywhere else I went. It'll get used before it goes rancid, trust me.
- Go back through Tropical Fruit World...
- And Cunningham's bananas...

Can't wait til I get my Ps and I can do it all myself :)
Posted by Unknown