I'm not going to lie. This stuff is not amazing. It's nothing like almond butter. It goes to show that if you're bothered to put the effort into something, it will turn out great. The opposite is true in this: I didn't try and so the result was not so fabulous. But I knew it wouldn't be spectacular, and I didn't try to make it spectacular, so that's ok. This stuff comes down to versatility, patience and time

I soaked a big batch of almonds nearly a week ago and they've dried a bit on the outside but they're nowhere near dehydrated. I wanted to make almond butter with almonds in this weird middle state so I popped a few in the blender and carelessly knocked the power to high.

And after a few scrapes and moving-of-chopped-almondy-bits and spooning around in there, I had spready, kinda oily stuff. It was chunky - super chunky at that, I found some whole almonds in there - and moist from the water but it was a quick almond butter style spread. And because the almonds are soaked, you won't feel like you've swallowed a brick when you eat a massive spoonful.

90% of the time, my nut butters just get blended into my smoothies so it doesn't really matter what it looks like or how moist it feels. What DOES matter to me, though, is the time it takes to make, and the cleaning up, which this nutty spread doesn't require a lot of.

So if you're really looking for an easy way to making nourishing nut stuff, have a try of this. You probably don't have to wait a week for the nuts to be in the fridge, but make sure they're not dripping wet or anything. They should only be moist on the inside.

But I'm just going to say, it's not the same as true almond butter. 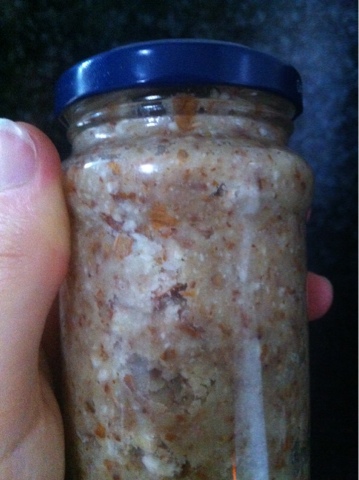