It's Coco Snow, Yo

Let's just face the fact that I'm never going to be bothered enough to make a proper, smooth, nut or anything butter. Butters that don't come from a cow (and really, aren't real butters) all seem far too laborious to make. I think the title of 'Butter' should only really go to raw dairy milk that gets shaken up, but for now I'll continue calling it 'peanut butter' and 'almond butter' for the sake of ease.

Like, why has it taken me over an hour to get to some sort of stage where both me and my blending ingredient - coconut - can agree with? Yeah, ok, so maybe I've done other things between blend and shake my blender around and have tantrums at it but let's forget about that... Everyone else's takes twenty minutes! Why does my blender not accept the fact that I'm trying to make it a Vitamix?

Remember that coconut I cracked a few days ago? This is the result from that, high expectations and not wanting to spend $9 on an Artisana more-like-just-a-taste Coconut Butter jar. Stupid curiousity makes me want to shove fresh coconut into a blender and perform some sort of HIIT arm workout to make it spreadable. Would a normal person do that? I'm not even sure. Is there much point to making blended coconut? I'm really not sure. Apparently it's nice, when it gets to butter. But, of course, my blender does not contain the engine of a fighter jet so a velvety, creamy jar of spreadable stuff is not what's going to happen.

So we had to negotiate a middle ground.
It's not desiccated coconut, which is what you get in the first two minutes of blending, and it's nothing like the stuff Artisana makes. I don't understand how other foodies are just like 'Just pop some coconut in the blender, come back in twenty minutes and you'll have a river of healthy, fatty deliciousness'. Life doesn't work like that for people with normal blenders! Every thirty seconds, every second, every pulse, you gotta open that blender back up, dig your elongated teaspoon to the bottom of the blender, bring the stuff at the bottom to the top and the stuff at the top to the bottom, and start all over again. Oh, and while it's blending and doing it's thing, you've gotta be shaking that heavy blender like crazy to get it all mixed up in there. For. A. Whole. Hour. Or more.

Anyone wanna give me a Vitamix?...

The process of making this blended-to-some-degree coconut stuff went as follows:

Enthusiastically pour all the coconut into the blender. 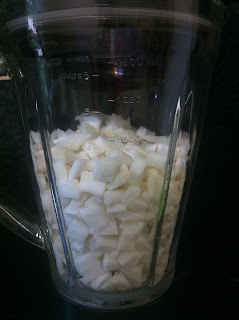 Realise that you're blender isn't going to get anywhere very soon with that amount of coconut in it. Tip half of the coconut back into the container you had it in before.

Continue to blend the other half, still enthusiastically. And by blend, I mean press the pulse button with one thumb, clutch onto the blender's dear life with the other hand, while shaking it as hard as you can backwards and forwards to get the top stuff to fall down the vortex vacuum thing that happens in the middle. And turn the coconut over with a long handled spoon every six seconds or less.

Blend for, let's say... half an hour. Realise it's half an hour to lunch time and you should start thinking about what to make for lunch, because your coconut butter won't be lunch.

Keep blending. And stopping. And upturning. And looking at your hopeless coconut butter that is getting nowhere.

Blend your coconut some more.

Get kinda bored and frustrated. Go to the fridge, get out some radishes and broccoli, cut them up, put them in a roasting pan, and roast it with some rosemary.

Come back to your coconut butter in-progress, and keep blending.

Start to get sweaty and hot. Take a break, go to the fridge, get a drink.

Come back to that blender.

Start to get sore arms from shaking around the heavy blender for an hour, because that's the only way you can get it to do something. Stretch your arms for five.

Come back to the coconut, and continue to blend.

Eventually realise that that smooth butter will not be yours, and give up. Leave it in the blender while you have lunch, which is now cooked. 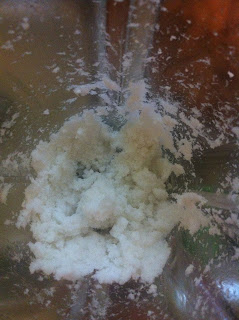 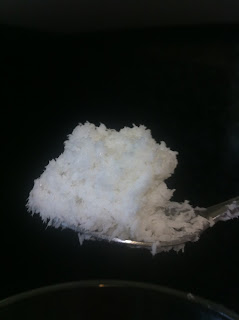 Once you're finished eating, empty the contents of the blender into a jar, and with your patience barometer half filled up now (it was empty before), doubtfully pour the rest of the coconut back into the blender.

Think 'What the heck, I'm never going to make this again so I might as well make the blender dirty now' and pour in a heap of dried, finely desiccated coconut. And some coconut oil, just because.

Blend in that same HIIT workout way of slamming the blender butt into the kitchen bench top every rotation the blade inside makes.

Become curious as to what that oil and floury stuff did to the normal coconut, and generously drizzle in more oil.

Blend a bit more, but without shaking, because for some reason it doesn't need it.

With a confuzzled look on your face, open up the hatch and scoop out some of the white stuff. 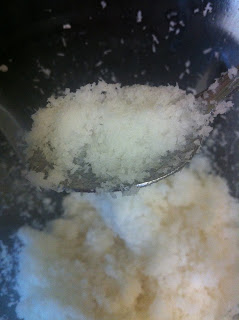 Change that curiousity into creativity and realise how scarily similar it looks to snow. 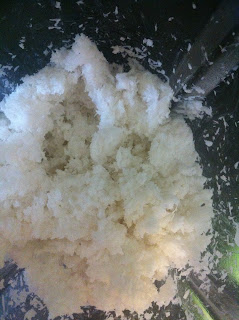 Come to the realisation that today was not a day for making butter but for making snow. Call your new recipe 'Coconut Snow', or to sound kinda hip, 'Coco Snow.' So when people ask you 'What on earth is that white flaky stuff that looks like your blender chucked a fit at you?' you can reply, 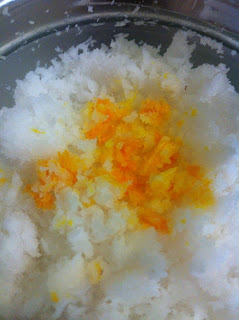 Overall, which did I prefer, taste wise? The smoother, more buttery one that took an eon to make, or the one that took less than 15 minutes, is flaky and doesn't condense much? 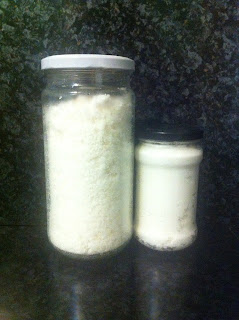 Well, I don't know about you, but I like food when there's more of it.
Posted by Unknown