I promised you two tied-together kale recipes yesterday. And here they are!

Last night I made myself a scrappy colcannon with stuff we had in the fridge. And we had a lot of kale. So a lot of kale went in. We didn't have potato though so I don't know if it's still colcannon... Colcannon is the traditional Irish recipe I was talking about yesterday. It's simply mashed potato with either cabbage or kale, with a dab of butter and maybe some scallions and parsley/chives. I may or may not have looked up the proper traditional herbs before I made it so mine turned out quite differently. And because I felt slightly deprived without potatos, I added the traditional dollop of butter (more than what's in the photo, shhh!). I'll just give you a run down of my super-specially-lazy and not-so-traditional colcannon. 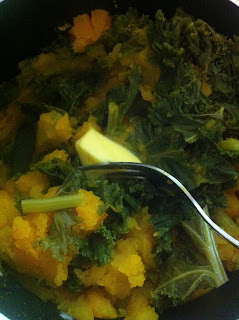 Could this Still be Called Colcannon

Serves as many as you want

Dump the pumpkin and kale (kale on top) into a pot and fill up with water until it reaches the top of the pumpkin.
Cover the pot and bring it to the boil, then change the heat settings to however your situation is going. Want that Irish goodness right now? Keep it at full boil. Chicken wings still have twenty minutes to cook (my situation tonight)? Turn that knob down as low as possible. Turn it off even, if it mushes up before you want it.
Once the pumpkin is all ready to mash, drain the whole lot.
Then add the butter. As much as you like. Really. Butter is good for you!
And get a fork and mash it all up. Mashing stuff is always quite fun, especially when you've got curly green bits there too.

Of course you could theoretically make this with any root veggie you like. It still wouldn't be a traditional colcannon. But it still makes for a delicious, healthy, kaley dish.

I had a heap of leftover colcannon (from planning) so I designed a really kaley breakfast for myself. It's an omelette with kale cooked in the eggy bit, and then the colcannon stuff is spread onto the omelette, which is then rolled up. Sounds too good to be true? It's not. Just check out these pictures. 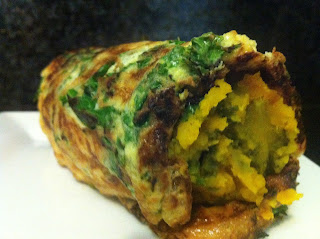 The process is pretty simple. Like I touched on before, you get your omelette going in a rectangular pan, and your mash heating up in another. 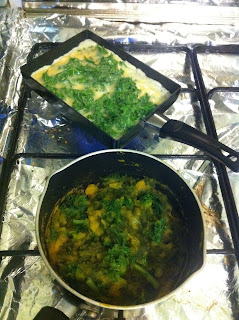 Look at all that kaley goodness!

Then, once you flip your omelette and cook it like normal, whack it on a plate or something and smear all the mash over more than 3/4 of the rectangle like so: 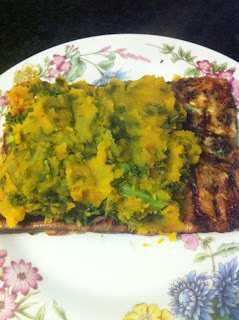 Just leave a little on the end, because you gotta leave space on the end of stuff when you roll stuff up.

And now you roll that stuff up. 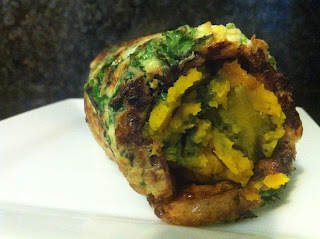 Serve it with a bit of lemon, and take a photo before your first slice. Because that 'slice' won't end up as pretty as you might think. Instead of getting something perfect like this: 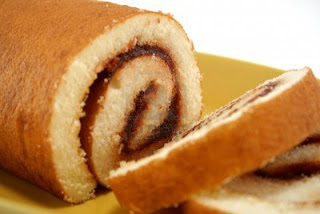 ...you end up with a squished: 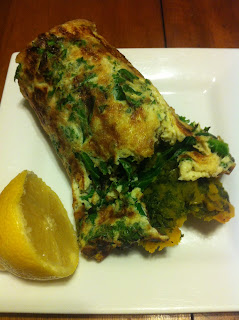 Yeah, not so pretty as before. But it still tastes good!

Chop up the kale leaves pretty small but still kinda roughly.
Whisk the eggs and the water until combined, and add about 2/3 of the leaves (or 3 kale leaves) to the eggs and mix it all up.
Heat up the colcannon in a small saucepan, add the leftover kale and add enough water for the raw kale to steam and for the pumpkin to not stick to the saucepan. Keep stirring it so it doesn't burn or do anything nasty.
Heat the coconut oil/butter in a rectangular frypan (round would work too, but it wouldn't look as awesome) and pour in the omelette mixture. Cook like a normal omelette.
Once the omelette is cooked, lay it down and spread the kale-added colcannon on the omelette thickly, leaving space at one end.
Roll the omelette up from the colcannony side.
Serve with lots of lemon juice.

By the way, the reason I add lemon to my kale or spinach stuff is because lemons have a lot of citric acid, which reverse the stuff that oxalic acid (in kale and spinach) does in your kidneys. The leaves are cooked, so that removes some of it too. Also, the non-heme iron in leafy greens can't be absorbed without vitamin c, so lemons (and the pumpkin in that colcannon) give you that vitamin c to get more iron than without. Oh, and I just think it tastes good. Think of gozleme. You have that with lemon, so why not something else?
Posted by Unknown