I've finally gotten myself a whole organism from the anamalia family, drizzled some fat on it, and whacked it in the oven all by myself.

A whole spatchcock is a whole animal, no matter how small it is, thank you very much. 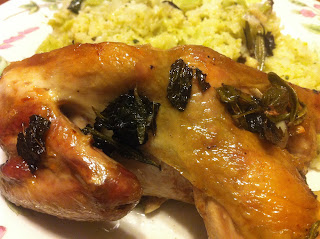 (I must admit, it wasn't a whole whole bird - he didn't have any organs or a face, but he was nearly there.)

We'd kept him frozen until I was ready to tackle him, so after roasting a duck with my grandmother, I got the gist of how to prepare a bird for eating.


I let him thaw out and stretch his little baby wings and legs - which, by the way, felt like they were coming out of their sockets. He was a really flexible little birdy, but I'm not sure whether that's just the way they are or if he was an animal of cramped conditions that led his wee body to exhaustion and weird flexibility - and rinsed him three or four times. I pulled out a bit of gunk from inside his carcass (which I didn't do enough of) and rinsed that out well too. And then I got some twine, wrapped it around his neck and hung him up to let him dry. I paper towel dried him to start him off, and I don't know if it's just what they look like, but he always looked like he was sweating or something. There was always a little sheeny bit of water left on him. 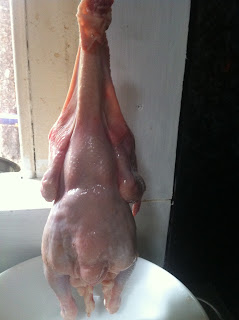 Then I got together my herby fat I'd smother him in. I grabbed a massive handful of fresh rosemary, mint and oregano (that's about the limits of our garden), ripped it all up with my bare hands, and mixed it with a heap of a mix of duck fat (from that roasted duck I was talking about) and bacon fat, equal amounts. I don't really think it matters what animal (or coconut) your fat comes from, as long as it's a good fat that doesn't get oxidised.

Once my birdy was dry enough to continue, I popped him in a prelined roasting dish and massaged the herby fat into his very loose skin. When we roasted the duck, we did some inside as well, but I don't think that's 100% necessary. When he was all relaxed from his massage, he went into the oven for a while. I'd like to say that he was in there for half an hour at 190-200 degrees, but I was reading the farenheit conversions, so instead of going hotter than 180, I went lower, maybe 165. Obviously he stayed in that dish for more than half an hour (45 mins I think). 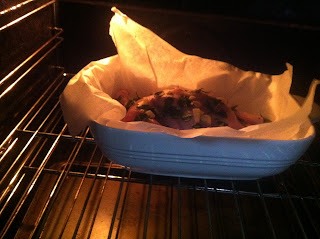 When he came out (after tossing and turning occasionally), I realised why we'd put the duck on a wire rack. He was swimming in his own fat! It was like a pool in there. I didn't realise how much fat that little bird could produce. I'm not complaining though - that's more frying fat for me :)

I served him with a cauliflower and broccoli mash, which tasted superb with a generous spoonful of the herby spatchcock/duck/bacon fat on top.

The thing I like about this spatchcock is that it's big enough to roast and eat at more than one meal, but small enough to tell other people 'Get your hands off my roast, there's only enough for one person!' 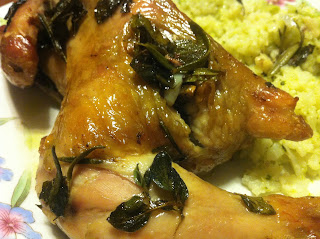