So much for my big blogging spree I thought I was going to have last week. I'd planned yummy cheesecakes and roasted spatchcocks and... they just never happened. No one (read: neither mum nor I) has been that hungry so nothing has really been cooked. Ok, so I lied about the cheesecakes. I made a second batch of cupcake cheesecakes with crushed up, pink-icing-and-100s-and-1000s-covered-sugar-soaked cookies for the base so I thought it might not be a good idea to post that recipe up. But I had a few other things to mention about stuff I found yesterday.

I really don't know how I found it - I must've been looking up herbal teas - and I found this website called Steepster. Basically, it's a social networking site for people who love to drink tea, and you rate the tea you drink and talk to other tea drinkers across the globe. Sounds ridiculous? Honestly, I think it is a bit. But I love the simple idea of it. I think the fact that I am signed up to it will make me want to drink more tea (herbal tea, that is) and hopefully get a better understanding of it. And find some tea-drinking friends too! Another good site kinda like that that I found is Punchfork, which is a Foodgawker-style site but you can put a preference in for paleo stuff. That's right, there's a foodie blog place you can choose to get you completely paleo meals! Aaand they have an app, so I'll certainly be using that a lot.

Last night I was watching Jamie Oliver's Christmas special on tv and how he made his roast potatoes to perfection. It included parboiling the peeled potatoes for 10 minutes, then roasting them in fat (oil of some kind, he used goose fat for the best ones) for half an hour, then taking them out, pressing them down to increase the surface area, adding herbs (one batch was rosemary, one was thyme and bay leaves, one was clementine zest and something else, I can't remember) with a drop of oil on them, and then put them bake in to roast for another half hour. Now, I am not a potato person. It's not just the white carbs and 'it's bad for you' boring health blabber, but I just find them boring. I'd really prefer a vegetable that has more flavour, like a pumpkin or something. But when he showed us the insides of these potatoes... Oh ma god I nearly died. Those roast potatoes will be made, and they will be made with proper potatoes. But I might do a test run with sweet potato. Several times. I've been craving sweet potato so much since, like, the beginning of spring. Sometimes I hate seasons for that. And pumpkin too. I've been reading too many American Christmas recipes I think! After Christmas I think I'm going to go out hunting for some smooth sweet potatoes. And make a roast with them. And post the recipe here. 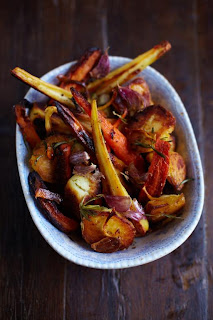 One of the other things I planned on making this week was some Christmas butter, which was just a nut and seed butter, but I got the ingredients as a Christmas KK present so I thought it was relevant to call it Christmas butter. And, you know, it'll be gone before Christmas Day. It was a mix of pecans, pepitas and almonds, but I'd eaten a few pecans so it wasn't all precisely equal amounts... It could've done with some more oily pecans though. 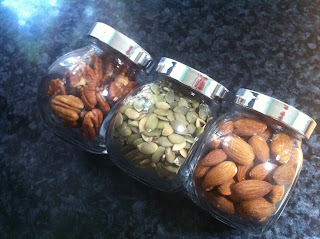 But, knowing me, and knowing my little tiny food processor I decided to use (stupidly), I was incredibly impatient and after my first half batch I couldn't take it any longer, so my first half of my mixture was a really tough dough and the second half I just gave up with at the sort of powdery, flour stage. Guess what'll be going into my smoothies for the next week? 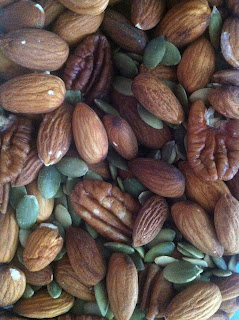