Short story: I made some yoghurt.
Long story:
My brother got an ice cream maker for his birthday, and the person who was more excited about it was me. One of the only seemingly pointless kitchen appliances I've been to scared to ask for! Sure, it's tiny, but I'll keep it churning!
My issue, however, was that we were out of any form of canned coconut, and I couldn't make the ice cream.
So on the weekend, I got dad to take me to the supermarket and I bought $20 worth of Aroy-D (I don't care about the unlabelled potassium stuff). Walking through the dairy aisle for dad's food, I saw a little expensive container, and I said Coconut Yoghurt. Last time I'd bought a coconut yoghurt it mysteriously disappeared. I decided to buy the orange lidded pot and keep it in my sights at all times. 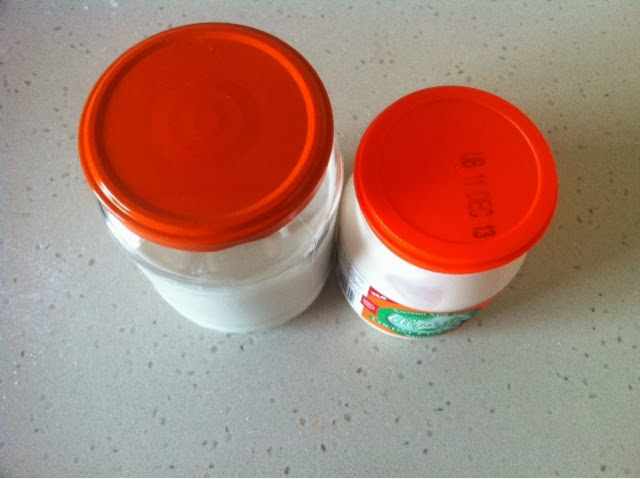 And then it hit me. I had all this coconut cream and all these little bacteria. Why don't I combine the two?! It made sense to me. So I hogged the oven for 24 hours and followed the recipe that's posted on Michelle Tam's site but isn't hers. 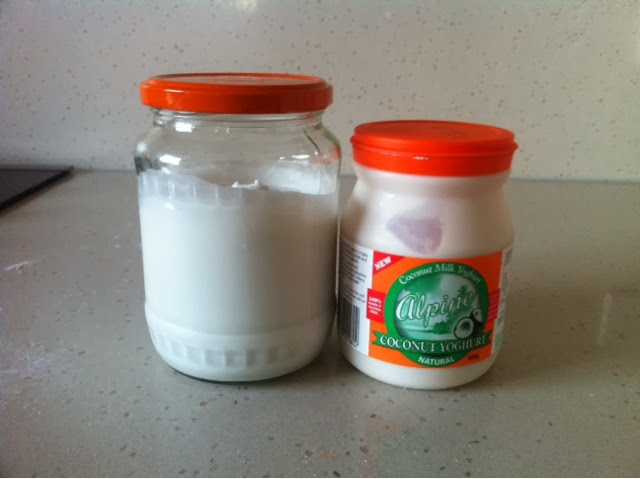 You may as well go to her site for the guest post, I haven't changed a thing.
http://nomnompaleo.com/post/45263391503/paleo-plans-simple-coconut-milk-yogurt
It was pretty runny. However, if you put it in the fridge (as you should once it's ALIVE...) you'll get more creamy Greek style yoghurt on top, and a thickish probiotic coconut water underneath that you could have in smoothies or whatnot. Or toughen up and mix it together and pour it like (thin) heavy cream on your passionfruit and blueberries. 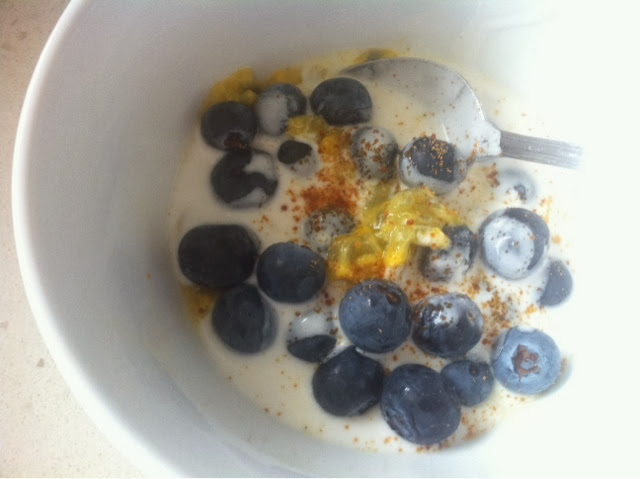 A note of... warning, however (it's not that bad). If you pour it on something cold like mango sorbet and let it sit for a bit, the delicious fat will solidify and you'll get an awesome cracked effect. 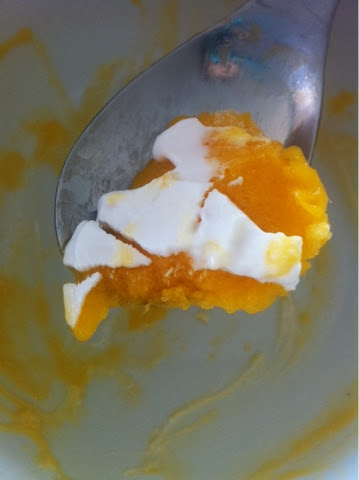 I'll definitely have to hog the oven some more.
Posted by Unknown No comments:

I've been eating stacks of bananas lately. They've just been a high carb breakfast dessert and they go well with the chocolate recipe that hardens when it hits something cold. My excuse is that my stress levels are very, very high and I need carbs to bring them back down, the coconut oil for my saturated fats, and the cacao (I haven't been too naughty with my chocolate and having cocoa) for the magnesium. Magnesium for sleep, carbs for sleep, and yet I woke up twice this morning, both times when it was still far to early to function.
You know what else is fantastic for sleep? Gelatin. Instead of the thick slabs of steak or any other muscle meat high in inflammatory tryptophan, gelatin has anti-inflammatory glycine, which, in short, helps you get to sleep faster.
So I added some lovely gelatin into my life and into my breakfast dessert (a girl's gotta eat :) ). Now the question is: why the hell am I eating foods that promote sleep when I've just woken up??
The reason I've used frozen bananas is due to what I have on hand. Remember that humongous box/branch of 121 bananas I got at the beginning of the year? Well, we're nearly through them all. Nearly. And so that is where the bananas are from. Fun fact: did you know that bananas are meant to have seeds in them? I've seen pictures of it; it looks like an absolute pain to eat around.
Also. I may have made a mistake in my recipe when I made it. You see, I was following Fast Paleo's banana pudding (I don't think hyperlinks work on my phone, so here's their recipe http://fastpaleo.com/recipe/roasted-banana-gelatin-pudding/ ) they had coconut milk. It's just that I've had previous experiences of poor gelatin measurement, and so when I think I've made a trayful of jellies, what I've really made is an accident waiting to happen. I'd reach up and confidently slide the mini patty pan tray out of the top shelf of the fridge, thinking that all the goop would be gelatinified enough to stay intact, and a flood of goop would cascade down, liberally coating my top and the floor, as well as some of the fridge insides. This has happened on more than one occasion, mind you. I didn't want to make the mistake again (weak gelatin foods are REALLY sticky and gross). But my recipe turned out to have far too much gelatin, so I've scaled down in the recipe. 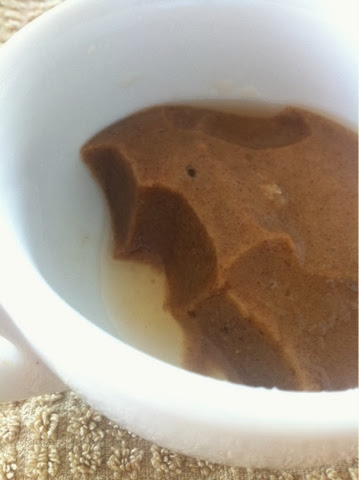 PS. That has honey on top, it didn't leak.
Banana Pudding from frozen bananas
3 bananas, peeled, halved and frozen
1 1/2 tbsp gelatin powder
2 tbsps hot water, optional
cinnamon, to taste
Take the nanas out of the freezer and chop them into chunks. It's easier than it sounds. If you want them roasted, sprinkle the cinnamon on now and pop them in an oven for 20 mins or until you can smell them. Mmm... If not, leave them out on the bench for about half an hour, or until they're pretty much thawed out.
If you haven't cooked the bananas, dissolve the gelatin in some hot water, and add as much water as needed until the gelatin is all dissolved.
Pop your soggy bananas, cooked or not, in a blender. As cinnamon if you didn't before, or if you want more. If your bananas are cooked, add the gelatin now. Purée on low until all the mixture had conglomerated and has come together to make one big happy breakfast dessert family.
Pour into moulds, or mugs, or thimbles if that's your thing. Refrigerate for 2 hours or until set. 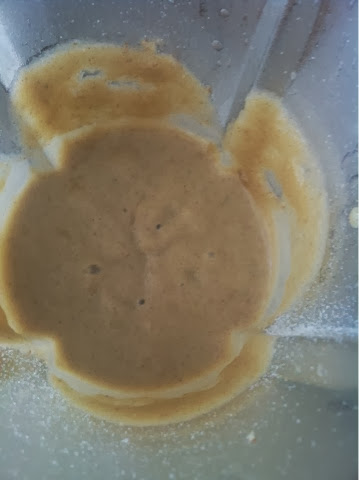 Posted by Unknown No comments:

I haven't updated this thing in two months. Honestly, it feels much longer. I feel like I've done a lot of paleo foodie stuff to say, but I probably won't even remember a quarter of it. Let's see... I've pissed myself off for not going to the raw milk farm when we went to New Zealand, one of the main reasons I went, I've done heaps more research about why we shouldn't diet (read: MATT STONE ROCKS MY SOCKS), I've bought two of the latest health bundles, I've given up listening to every.single.annoying. webcast webinnaire videos where people talk really slowly because it clogs my inbox, and I'm down to one drawer of bananas left in the freezer. Unfortunately, it's still pretty full, so I'm wishing for a cow for Christmas.

Some more, actually somewhat exciting things that have happened:

- My birthday! I woke up to the best birthday present - my first acknowledgement of a somewhat ok metabolism: 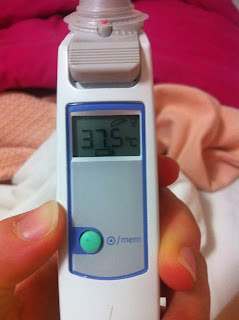 I also made a coconut oil pie and a watermelon cake to celebrate (oh, and an organic roast chicken) and I'll post a recipe for that later. Some day. One day.

- I bought my first pair of lululemon yoga pants. I feel like my life is complete. I never had a pair of proper yoga pants for the whole year or so that I actually trekked it out to the yoga place to die for an hour on Saturdays.

- My ferments have actually worked! I lost hope in my many, many strawberry kvasses so I gave up, read about fermenting for a bit, and then stuck some cabbage and a cucumber or two in jars. And a bunch of asparagus in the St Dalfour's jam jars I've been wanting to ferment asparagus in ever since I saw them. And guess what? 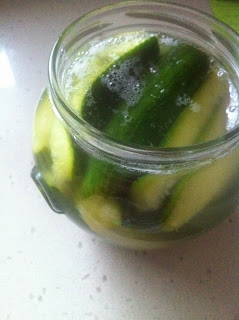 THEY WORKED!! :D DELICIOUS BACTERIA FOR EVERYONE!! 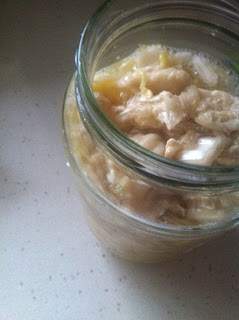 - I'm doing the HSC. So, in layman's terms, I have the right to stress every second of the day for the next 365 days, as of about last week (the end of the exams). And thus, I have woken at 4am the past few mornings, despite my copious banana eating. Humph.

- I had proper 'junk' food yesterday. I went to my friend's party (just a few movies with just a few friends) and they ordered pizza for dinner and honestly, it looked gross anyway so I looked like an anorexic while I said that I'd had dinner before I came (true story though). But the birthday cake came out and it was a passionfruit cheesecake and I was like 'you know what? I've already had butter twice today and I don't want to look like a restrictive twat who refused to eat normal food and Matt Stone says that junk food is good for you so...' And I grabbed the cheesecake slice that had been one of the first ones cut (my friend was starting to get them all messy). And so I took my cute little forkie and dug into the sweet cream cheese. And boy did it taste sweet. Other people said it was remarkably sweet as well, so it wasn't just me. And I started to realise what 'full' meant. It opened my eyes to feeling my stomach instead of feeling how much is left on the plate. And so I didn't want to finish the cheesy bit; I didn't want any more. And so my friend who eats everything, ate the rest :)

- I've fallen in love with awful offal. I hazarded taking the kidneys out of the freezer, and I soaked them for 24 hours before frying the teeny chopped pieces in a large amount of butter. Delish!

Which brought me the inspiration for this recipe :) 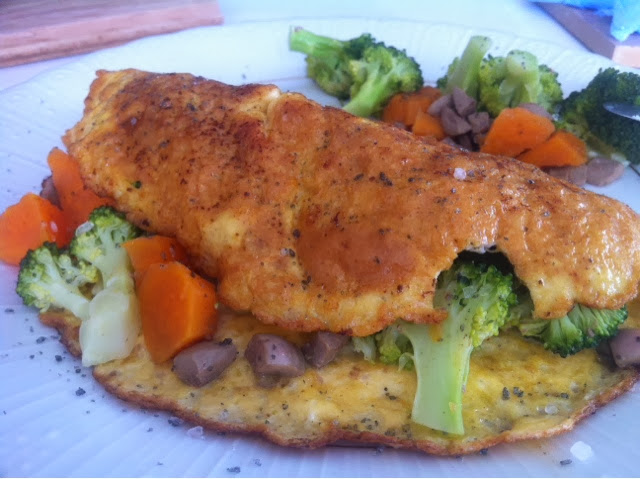 2 lamb's kidneys, preferably from lambs who had previously frolicked in meadows
2 eggs, preferably from chickens who had dug up their own wormies for tea
about ten of those smaller florettes of broccoli that are at the top of the head of broccoli
a tennis ball size chunk of sweet potato (I never know how much sweet potato to eat)
as much butter as your inner dairy gods will accept as sacrifice
Half a grove of olive oil, to serve (or just a drizzle, to taste)

Freeze the kidneys, then take them out of the freezer for half an hour, slice lengthways, cut out the white bits and chop up the meaty bits into teeny chunks. Pop into a mug with water and a splash of apple cider vinegar or other vinegar, cover with cling wrap, and put it in the fridge overnight. Strain, then soak in plain water for another 4-6 hours (or until dinner time, if that's when you're having them). Strain and put them in paper towel to dry.
Bring a pot of water to a boil, chop up the veggies quite small, and add them to the pot. Cook them up until al dente/not overcooked.
Put half of your butter/fat in a fry pan, cook on medium so the fat sizzles and once the milk solids stop bubbling so much, add the kidneys, don't touch then for thirty seconds, then do the really cool chef flick-of-the-wrist move to toss the kidneys, leave them for ten seconds, repeat another two or three times, and then take them out of the pan quick smart.
Beat the eggs in a small bowl. Add them to the fry pan that was just cooking kidneys, in the rest of the butter if needed. Cook it low and slow - if it's quite thick, your pan is too small. It needs to be quite thin. Keep it frying on low until all the egg is cooked.
Strain the veggies and dry them. Mix the kidneys in with them, and pour the mixture onto one side of the omelette. Fold the rest of the omelette on top like a blanket.
Somehow transfer the omelette to a plate and drown in olive oil (or drizzle, or neither if olives aren't your thing).

Posted by Unknown No comments: