Shannon's Date in a Blankie

On Wednesday, we're going on camp for three days, two nights for school (I'm perfectly fine with the whole 'camping' thing, I'm just panicking a little over the food choices there) so tomorrow I'll be running around like crazy making sure everything is ready so I decided to post tonight to make up for it. I really hope I survive it, and get enough sleep! They said that lights out is 11pm so I think I'm going to be a little dead by the time I come back. Anyway, onto the recipe.

Last year, our Canadian friend, Shannon, stayed with us for a few weeks before going back home to Calgary (I sooo want to go there!) and before she left, she shared a recipe (well, it's more like an unrecipe) that she and her friends love back home. And when she made a batch of these for us, it's no wonder you can't eat just one!

They're crunchy, chewy, sweet, salty, and oh-so mouthwatering, and super simple too! I guess you could call them healthy... Well, they are. They just taste so awful for you but it's just three real ingredients, so it's fine to nom away. The only bad thing about it is that they're kinda high on the calorie side... and that the batch I made here is kinda burnt. As long as your turn out somewhat like mine and aren't as dark, you're good to go. (ignore the bad photo - they were gobbled up before I got to make them look pretty!) 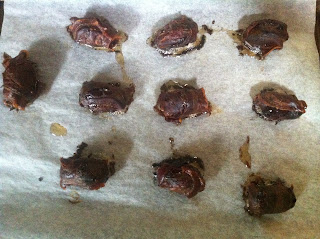 Shannon's Dates in a Blankie

Toast the almonds over low heat in a saucepan or small pot.
Pit the dates and put two almonds in each date, making a long line. 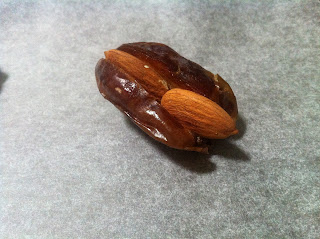 Squish the dates closed (how cool is that?! It's my second favourite part of the recipe, after eating them).
Wrap the dates with the proscuitto. You might need a toothpick, or you could even get a massive piece of it (I've got pancetta here) and fold it up like a parcel. 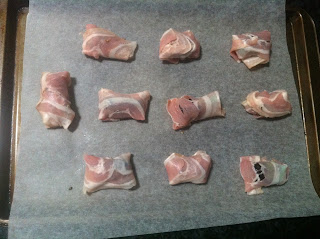 Put the dates on a lined tray and pop into a preheated oven at 180 degrees for 10 - 15 mins or until the proscuitto is cooked.
Posted by Unknown