For the last two months or so, I’ve been starting to enjoy having smoothies with my breakfasts occasionally. They’re a quick combination of yummy fruit, lots of protein, nuts and even more nuts in the milk. I might also like them because of the fact that we have glasses that make them look kinda cafe-style. I have a few little mini stories about my two-month progression of smoothie-making and I thought that I could just collect them all and include them all here. So excuse the random jumping around here. 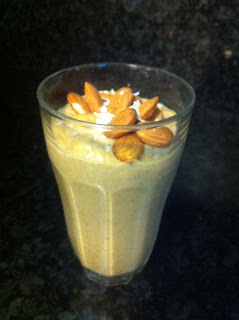 My favourite smoothie fruit is mango. I tried a banana smoothie once, but it was too.. gaggy for me. I think I’ll have more bananas in their whole form before I move onto having bananas in any mashed, mushed or squishy form. I’ve also tried pumpkin and that would have to be my second favourite. And orange just doesn’t work at all; it’s all watery and stuff and that doesn’t go well with the powder. I don’t think I’ve experimented with any other fruits... Does anyone have any ideas for other fruits/vegetables I could try?

It’s a little against my ideals, but I got myself a big bucket of protein powder a while ago and I’ve been popping a tablespoon of it into my smoothies. When I first got it, I couldn’t find a scoop so I assumed it didn’t have one, but I eventually dug down to it and when I found it, it was GIGANTIC! It would have to be at least two tablespoons! How does someone fit all that powder into a smoothie that is supposed to be runny and slurpable? That wasn’t going to happen. Also, the powder I’ve got is unflavoured so it’s not the most... amazing taste in the world. But after having a tablespoon of it nearly daily, I’ve gotten used to it and sometimes I kinda crave a smoothie just for the (overwhelming) taste of the powder. It’s kinda weird. I guess it’s like how I initially detested tahini and now I love it.

I entered a healthy chicken nugget competition some time ago and surprisingly I came a runner up! :D I was so excited that the people who were running it actually tried to make my funny nuggets that I think I was more excited about that than my actual prizes. One of prizes I got was a sample of super greens and reds so I tried it in my smoothie this morning instead of my protein powder and it smelled a bit spirulina-y before I tipped the little sachet in but it tasted great! Well, it didn’t exactly taste like anything; for once, I could taste the mango instead of any powder. It was a nice change from the protein powder, with all the organic vegetables, fruits and superfoods. I can’t say that I can feel any more energy or more vitalised or anything but it's got to be good for you.

I think it’s been two weeks now that I’ve improved the whole smoothie-making experience for myself. I used to own (actually, we still have it) a little tiny blender with a teeny baby 250ml cup thing to put the content in, and while I can actually control how much fruit I need to make a smoothie the right size (or else I’d make a batch for a small community), the stuff at the top wouldn’t be as blended as the stuff at the bottom so I came to liking the idea of a chunky smoothie. A couple of weeks ago, like I said, I upped the ante and I got a big 1.5L blender. I could not be more excited; I could finally have smooth smoothies! So of course now my smoothies are far too big to fit into one glass.

I think that covers all my little stories for now! I don’t even know how I have such a variety of things to talk about when it comes to smoothies, because I barely stray from this super-short ingredient list and I’ve barely had my share of smoothie time. So here’s the recipe to the one-and-only simple smoothie! 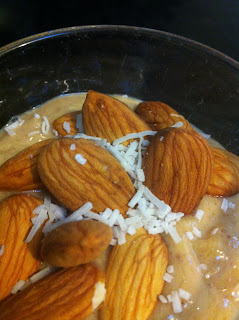 flesh from 1 big mango cheek plus all you can get off the stone
1 tbsp nut butter (I have almond, walnut or peanut butter)
1 tbsp protein powder
non-dairy milk (I use almond milk)
a couple of soaked almonds (optional)

Pop the first four ingredients in the blender in the order provided (I find it easiest this way, so that the nut butter or the powder doesn’t get caught up in the blade and do funny things) and when pouring the milk in, pour in about enough to cover three quarters of the content in there or enough to make it runny instead of a puree kind of thing. Pour into a pretty glass and sometimes I like to drop in a few soaked almonds :) 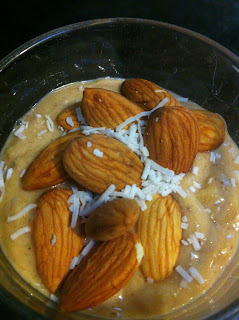