This afternoon, I asked my friend what I should make for dinner and the response I got (and wasn't expecting) was 'lasagna'. Outside, I said no. Inside, I proclaimed CHALLENGE ACCEPTED! and started brainstorming ideas for veggie-filled lasagnas without pasta. What could I include? Zucchini? Carrot? Tomato? But when my brain turned to 'pumpkin', I had ideas like crazy and knew that that would be what would be made. 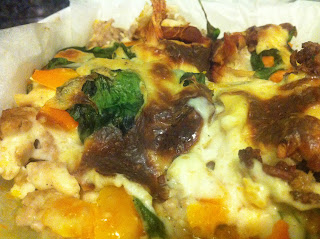 The pumpkin was my second challenge. I got it last week and had neglected it because, well, I'd have to cut it up. But today I got home and carved that pumpkin up. He must've been seeking revenge for not being touched for a week, because he was soo hard to get a knife through! Every slice was like an opportunity to lose a finger, a toe or worse. But thankfully all the anger and frustration was all contained in his thick skin so he was a little looser on the inside.

I'd had a really fancy idea for this lasagna and I wanted to make a white creamy sauce only because I knew we had some cauliflower, but when I explained my idea to mum she just whipped up a batch of flour-butter-milk white sauce. Sigh. I wasn't going to try to explain my cauliflower sauce idea tonight so I just let it be. Mums always know how to cook food best, so I let her do it and decided that I'd make my super paleo idea another day.

This is also a bit of an unrecipe in terms of types of food to include. Yes, put pumpkin, but use whatever type you have that's been neglected in the fridge, and I had butternut. Use whatever sort of mince-y, cut-up meat you can get your hands on (I used half roast chicken breast, half pork mince because that was what was available). And feel free to include any other veggies that tickle your fancy in the mix! 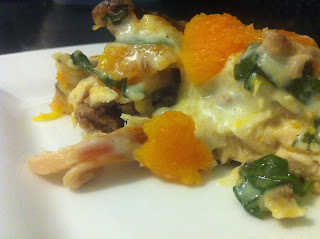 Serves 4
350g pumpkin
500g meat of some form that isn't a solid piece of muscle
clove of garlic, minced or chopped finely
some massive handfuls of spinach
2 tbs whole wheat plain flour
1 tbs butter
milk
oil for spraying
Cut the pumpkin up so that you've got slices of pumpkin and not chunks of it, so it's about 5mm thick and as long and wide as possible (mine is about 10cm-15cm long and 5cm wide).
Steam the pumpkin for 10 minutes or until it's cooked a little and isn't going to fall apart when you pick it up.
Meanwhile, cook the meat if it's not already, with the garlic.
While that is all cooking, fry the flour and butter in a small saucepan and whisk until cooked, and add milk while whisking until the sauce reaches the consistency of a thick custard. Add salt if preferred.
Assemble the lasagna: To do this, cover the bottom of a deep pre-lined (oil or baking paper) baking dish with some pumpkin slices until you can't see 97% of the bottom.
Next, grab some spinach leaves and lay them onto the pumpkin.
Then grab the meat and layer it on top until all the spinach is covered by the meat. You might want to squish the layers down a little for this.
Pour some of the sauce on top and make sure it's all spread out and covering everything.
Repeat the assembly order until everything is used up.
Lightly spray the top of the whole thing with a touch of oil so it doesn't burn (I forgot to do this).
Pop the whole lot in a preheated-at-180-degrees oven on fan forced and bake for 15 - 20 minutes or until the sauce is all cooked inside.
Slice with a sharp spatula-type thing and serve. 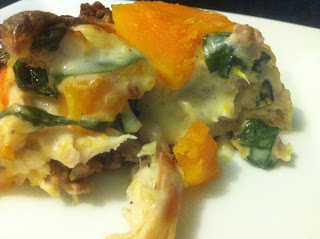