My mayo actually worked, so that's not where I'm going. But one tip I'd love to throw out there: DON'T USE EXTRA VIRGIN OLIVE OIL. I used about 3/4 evoo, some macadamia oil and some sweet almond oil, because I read a thousand recipes saying 'don't use evoo' and I was like 'I can handle a bit of evoo'. But no. Even slightly diluted, just no.

And I didn't even use that much oil. But when I make it again, I'll make sure I have a bit more patience (and a lighter tasting oil) so that I can see what it's like when you use all of the oil. I only used a third of the amount.
Another change I would make would be to make sure that the jar is small enough for the blender to blend stuff in. Half the time I was surprised that yolks and oil was actually mixing together at all. Oh, and I'd also put mustard powder as quite a lot of the recipes called for, because apart from the olive hit you get in your mouth, that's about the only thing. Other than that, the texture was wonderful. Oh, and I'd also try a version with bacon fat, and maybe another one with apple cider vinegar for the acid. I can't wait to make more mayos!

Oh yeah, did I forget to mention that this is ultra healthy? I mean, how much better can you get than raw egg yolks?

Here's the recipe that I used several sources to try from: 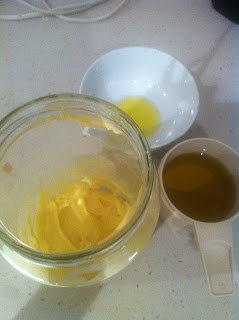 Put the yolks and lemon juice in the bottom of a tall jar or bowl or anything that a stick blender will work in.
Blend it up with a stick blender until combined.
Add the oil. Not all at once, stupid! Use a teaspoon to drizzle it in SLOWLY. Very slowly. Until you lose patience like I did and keep increasing and add 4 tsps at one point.
Spread liberally on everything in 1 - 2 days, you're handling raw eggs.

What did I spread it liberally on? Well, din dins was a mix of random foods, so I made myself tacos! Awesome tacos, that is. Chicken wing meat, fried/roasted carrot, lots of mayo, in a salami round. Mmmm... 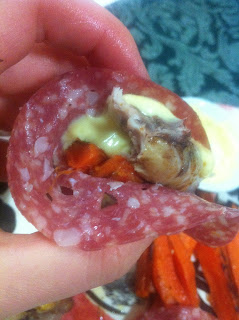