To kick off this entry, here's the clip I'm about to tell you about:
http://www.youtube.com/watch?v=WZuV1LJxtJk
Skip to 1.45 for the important bit by the way. I was watching Disney (forcibly by James) and this scene came up. I cracked up; this Jerry guy is me! It was hilarious. Watch the video to find out what I'm talking about! (PS I don't mean that I saw my grandmother in a bikini one day).

On a slightly different note, I bought some lamb's tongue at the butcher a few days ago because it was the cheapest cut of meat (no surprises there). I had a quick look up at how to cook it and even though I only found beef tongue, it seemed pretty simple: poach for a while, peel the skin, slice thin, panfry if wanted. There was speculation over whether to let it cool or not before peeling, so I did half half.

I popped the tongues (five of them) in a pot with some rosemary, oregano and chilli... 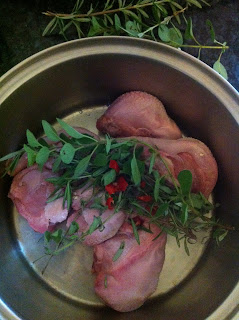 ...brought it to the boil (for too long. I think it was on for ten minutes, not what you want to happen to a tough meat.), simmered it for 30 mins and tonged them out. Some went in a bowl of cold water, some went in a normal bowl. I tried to peel the hottest one in the dry bowl, but it wouldn't peel easily, so I tried the ones cooled. The tip of the tongue peeled easily, but it didn't come off in one piece. I peeled a bit and only 5mm squared came off every time. It was ultra annoying. I stood there for probably half an hour trying to peel them all to no avail. They stayed just as hard to peel. So I sliced it all off one tongue and decided to settle for that. The dog loved the other four that still had skin on it. 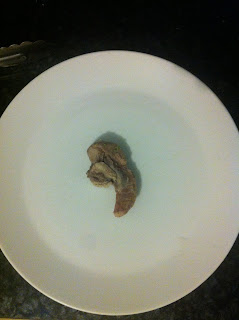 I sliced it thin and panfried some of the slices. By meal time, I had so little meat that I had to add some rissole things from last night (250g beef mince and a whole bunch carrot greens, finely chopped - they were ultra grassy, but I love that) to have a decent sized meal.

The tongue was... chewy. It wasn't that bad, but it just had a rubbery feel to it. I don't like my meat feeling like it's made of rubber. It tasted fine, like normal meat. Pan frying it just made it a little crunchy and warmer so obviously they were a little better, but the slices were so small that there were so few bites in them.

If I was served tongue in a restaurant, I wouldn't be crazy about it, but I'd admire their effort and would gobble it down like any other meat. There's nothing wrong with it.