I suppose I'm not going to model for the hair show in the June long weekend so I get to go camping again! Yay! So I've compiled my list of things I want to eat while I'm down there (forget that they're all going to make me fat), including marshmallows because that's just a given. We have a fireplace and we all toast marshmallows, so I decided to have a crack at making my own marshmallows because I don't want to eat the crap you get in the shop. 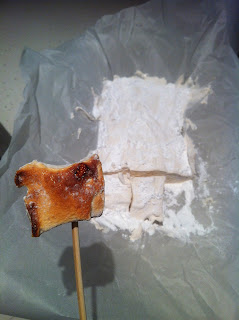 Following Mommypotamous' recipe, I made a half batch of fluffy sticky clouds of goodness. Basically, you mix a honey caramel with dissolved gelatine, beat it until it's fluffy, then let it sit overnight. It's a basic concept but it's not so basic seeing as you have to make a CARAMEL.

First, you dissolve the gelatine with the water. You'll wonder how the hell the hard gel goo is gonna result in something fluffy, but be prepared to be amazed.

Then you put water, flavour (I put vanilla), salt and a beehive of honey into a pot and 'keep on medium high heat until it reaches 240 degrees'. Big problem. a. My stove is ultra strong and it's really hard to tell what's medium and what's high and b. I haven't got a candy thermometer. So I put it on what would've been high heat and let it go. I knew it would take a while so I left for thirty seconds and...

When I came back, it had volcanoed and there was honey caramel all over the stove and everywhere! I turned the heat down but I had to keep turning it up for the caramel to do something.

So after vigorously stirring a pot of bubbling candy (I know, French chefs, sue me for touching my caramel) it eventually reached soft ball stage. I dropped a bit in cold water and it makes a soft little ball in your hand. And once I realised it was done, I think I overcooked it. The second before I took it off, it was fine, but when I stopped mixing it it took on a funny smell.

Regardless, I called James to help pour it into the funny gelatine stuff which would be easy enough for me to do by myself next time. I whipped it up, and that only took five minutes. Then it went into my prelined baking tin with some arrowroot on top. Next time that lining will be done so much better.

Then I had to lick everything clean, which was a lot of marshmallow cream. But I put the semi clean beaters and spatula and stuff in hot water for five minutes and it all dissolved. Urgh. Next time I know I don't have to clean it with my mouth.

And then you just let it sit for four hours. I cut it at four hours and the other half after overnight, and there wasn't too much difference in firmness. And I toasted a bit and it kinda melts. Oh well. I'll try toasting it when it gets older. James liked it, so guess who's making marshmallows more often? :) 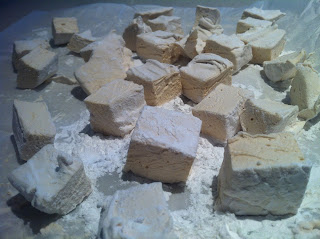