The Middle Easterns have their dips down pat. Just look at tahini. Isn't that a fantastic little spread that's a great creamy addition to a lot of stuff? If I don't put olive oil on something, I'll probably drizzle and dollop some tahini on it. But then there's baba ghanoush, which is fantastic made right (or bought) or bad. Real bad.

Ages ago, I came across another dollopy spready purée thing that hails (or seemed like it would hail) from the Middle Eastern area. It was called avjar (pronounced av-yar), but because the blender and I don't have the best relationship, and I'd just eat it all out of the blender as soon as it was made anyway, I gave it a miss.

Today, I was desperate for food so I strolled into some place called 'deli' and picked up some sliced salami and marinated olives, and as she was slicing up my future taco shells (deli meat is THE best for holding food), I turned around to find red jars of, you guessed it, delectable avjar. Take note that I've never tasted it before today, I already knew it would be a spoon of divine Middle Easternness.

And then I looked around a bit more. And I found another jar called malizzano. There was no way I could leave this shop without both jars. Even with the evil oil (sunflower). Sometimes I think it's better to taste things to know what they taste like, even if it means going against ideals you'd normally not stray from. And the jars are from Macedonia, and it looks like they've been made with love.

I should probably mention what these jars are made of before I tuck in with a spoon. They're very similar; they're both a simple blend of roasted capsicum and roasted eggplant, but obviously the avjar is red capsicum and the malizzano is green. It's quite strange, though, how they taste a lot different to what they're made of. I reckon they'd both taste good mixed with either roasted tomatoes, tahini or maybe paprika or cinnamon or some other spices, or maybe all three. Oh and garlic. It almost tastes like it already has garlic in it. Or some soft white cheese if dairy's your style.

I'm not quite sure what to eat it with, but my options so far are from a spoon, simmer and cook eggs in it like shakshuka, or obviously as a dip with some veggie sticks. I had a google search around and found that it's good for salad dressings, meat marinades and as a lasagna sauce. Can't wait to try it all! 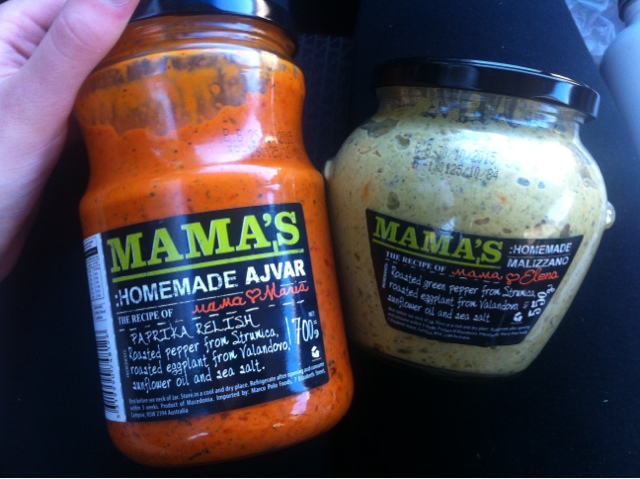