This morning I had a bit of time so I decided to make myself baked eggs for breakfast. Bad idea. Well, not really. I definitely learnt from it. It was kinda funny how I stuffed up because, in a way, I planned for it to happen this way.

My baked eggs went as followed:

I fried up my sliced mushrooms and greens (some grown up bok choi and a bit of spinach) the night before... 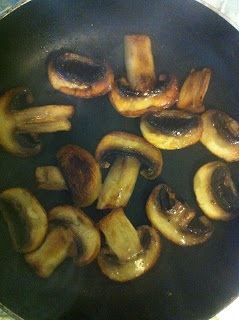 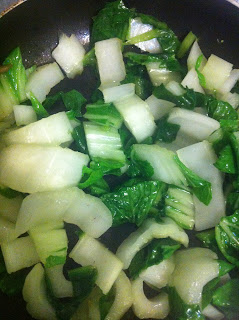 but I only half cooked the greens because I knew that they would get even more cooked in the oven in the morning, so the white bits of the bok choi was still quite crunchy. And I popped it all into a medium sized ramekin.

I got up early in the morning, preheated the oven, cracked my eggs into the ramekin, and put it in the oven. I've made baked eggs before, but this morning it was really weird and didn't finish cooking in 20 minutes. I think it must've been 40 minutes when I gave up on it. The top looked as if part of the egg had frozen or something, and I'd put it under the grill for probably 10 minutes, and it STILL hadn't turned out right. It was a runny on top and it was weird. I soaked it up with a paper towel (it looked edible) and when I dug in, I realised my problem. 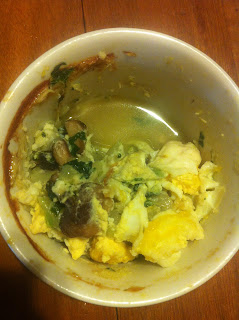 The half cooked bok choi. 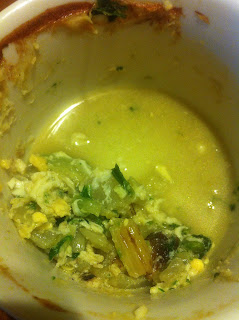 I knew it would cook in the oven, that's why I parcooked it on the stove. But of course, the water from the bok choi had to escape somewhere and that somewhere was into the ramekin! Urgh, why didn't I think of that? So I had this soupy mess of greens and weird eggs and it was just... bleugh.

Anyway, the lesson to learn from today's mistake is work out where the water will go. Especially if it can't steam itself out.
Posted by Unknown