I don't even know how many days it's been since I've posted. I'm not going to count, because I'm trying to not stress (hint: that hasn't happened.) and I've been really demotivated to post anything because I've had nothing to post. So I think next week I'll be posting a whole ton because I've planned about four recipes to make, plus I want to post about something that's not cooking related. Just thought about it now, make that two things. Three things. I'll get up to date with posting then! And by the time Christmas rolls past and we get to New Year's, I'm going to be chockers with days out and courses to go to and I'll try my hardest to keep blogging at the (unstable) rate I've been going. And then it's into year 11! So that'll probably mean you'll be lucky to hear a peep out of me. For the next two exciting years.

I made these cakes at a time where I just wanted to bake, regardless of my oven's temperament. So I made these for my friends because it seemed easy and kinda healthier than they looked like it tasted. And because I like cooking for people I love :) 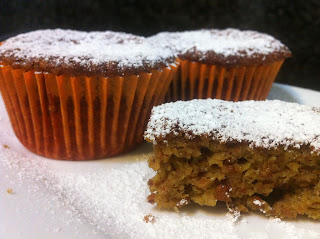 My thoughts on the cake? It was a little eggy but I was kinda expecting it to be so with all the wet ingredients and the copious amount of eggs (six!). Also, the almond meal I used was my failed dehydrated almonds (I'll have to make a post of that at some stage) crushed up in the blender. But I wanted a bit of a texture in the cake so there's some really roughly chopped almond bits in there. There might even be a whole almond. Oh, and as far as the oranges go, the oranges I used were frozen and they worked just fine. Just make sure you cut off all the pith or it'll taste bitter! 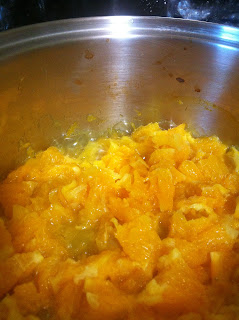 Everyone else's thoughts on the cakes? I gave them out to my friends but no one really took one and the few people who had it said that it was too eggy and boring and that they didn't like almonds/oranges/sugar so I had a few cupcakes left. So I whipped up an icing, which turned out gorgeously spreadable and my idea of a perfect icing and handed them out today. Guess what? They turned out to be a hit! I was asked for the recipe twice! Moral of the story: icing makes cakes amazing :) 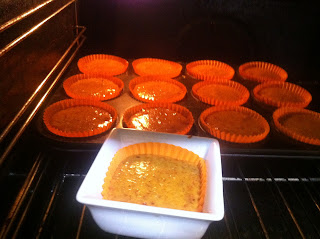 I barely changed the recipe at all so I'll link you all over to the gorgeous The Wren and Rabbit for the recipe for the Orange Almond Cake. I think that if I used proper, blanched, properly-ground almond meal and had an oven that worked evenly on both sides, it could've turned out as good as hers.

For the icing, I didn't measure anything but I'll see if I can recreate it in some way here:
3/4 cup icing sugar
1/2 lemon
2 ts butter
a dribble of water
I put the icing in a bowl and squeezed nearly all the lemon in. To give you an idea, about a third of the icing sugar was at super-rock-solid stage after I mixed it a bit. Then I added the butter and a bit of water (I really wouldn't be able to tell you how much, I dripped it all in) and stirred it until it became the goddess-like, super amazing spreadable frosting I wanted it to be. So feel free to pour in water instead of dripping it in if you want it a little runnier.

Oh, and did I ever mention that this is gluten free, lactose free and almost paleo? I had half a cake, it was that healthy, and I normally don't have cake. (no, I didn't take half a cake away from my friends! The batch made thirteen so I ate the odd one in the square ceramic dish you can see there)
Posted by Unknown