Neither mum nor I wanted a big dinner tonight, and neither of us wanted to do anything fancy. Mum said that she'd be happy with toast for dinner. But on the weekend we picked up a couple of cute little (like 15cm long) fat, organic zucchinis and I didn't want them to go yuck. And I'd planned this meal at the beginning of the day so it was going to happen. 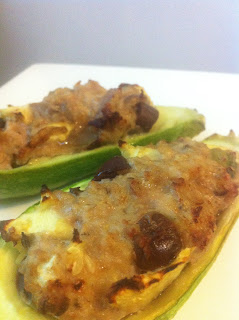 This recipe is a very, very laid back recipe - if you could call it a recipe at all. I was pretty demotivated to take good photos so what you see is the best my laziness could do with an iPhone. Which is very little.

I gathered a collection of paleo stuffed zucchinis and found that it's basically just minced meat, a few bits and bobs, herbs and spices if you're feeling snazzy, and your scooped zucchini. The recipe that really wowed me the most was this one from Eat Drink Daily with the addition of olives. Boy, were they a good addition! They really tied the whole thing up, and I think that without it, this recipe wouldn't even be that fantastic enough to write about.

I added rosemary to my plate after I took the very few photos I took, and although it made it look better, I wasn't going to take another photo because a. my zucchini was already in a wreck, I had to eat some to realise it needed the rosemary and b. I was simply too lazy. I've added some fresh rosemary to the recipe to make this dish more of a funky-looking roast sort of thing, if you get what I mean.

Oh, and one last thing. I probably should've thought about this before I did it, but I brushed the oil onto the zucchinis after they were stuffed. Let's just say that that's not a good idea for people who like clean hands and non-raw-chickeny brushes. By the way, I used coconut oil for mine and butter for mum's. 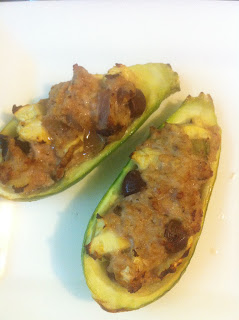 Slice the zucchinis in half lengthways so that they're like long boats. And trim the top and bottom too.
Using a spoon or a knife, scoop or cut out the seeds in the zucchini and save them.
Brush the oil on the outsides of the zucchinis. I'd suggest not to brush them on the inside because the meat will be there.
Slice the olives into thirds or quarters, chop up the chilli finely and same with the rosemary.
Mash up the rissoles with a fork and add the stuff you just chopped up. Mash it up a bit more and squish it all together.
Stuff the zucchinis! Squash the meat mix into the cavities in the zucchinis and make sure it's all nice and packed in (just as long as it doesn't fall off in the process). 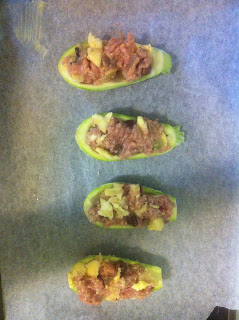 Place them on a baking-paper lined tray and pop them in a preheated-at-180-degrees oven for 20 minutes or until they're cooked. 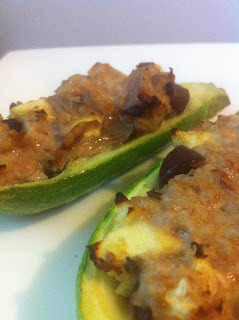