Good morning/midday/evening peeps! Today was a relatively fine day... I started a course in the city, and it goes for 6 days, 3 hours every day, Tuesday to Sunday, and today was obviously the first day. I had high hopes, but they weren't exactly reached in the way I wanted them to.

We did make up today, and I'm not one to wear make up. In fact, this was my first time doing my own make up (I've had it done to me lots of times before so I do know what it's like). And the outcome? Let's just say it was like a four year old had drawn on my face with their left hand. So I quickly took it off before I headed back into the city for a bit of shopping.

For the first time ever, I found a lululemon store! And omg it's like paradise. There's all these beautiful clothes everywhere, and the designs are all varied enough to not be boring, and the layout of the shop was amazing, and it wasn't a tiny shop! It was quite large and well-stocked, so I took my happy little body around and picked out about five different items, just to try on. Aaaand I felt the desperate urge to buy something there to hold onto those ten minutes of being in the store, so I got myself a pair of overpriced booty shorts. And then I felt guilty for spending so much on so little fabric that I went home and used up the overripe bananas in the fridge.

This banana bread was made in a bit of an unhappy mood. I'd bought super expensive black lycra undies, I'd made a mess on my face, and I wasn't in the mood for bad food, which often happens when I cook food I'm not familiar with making.

But this loaf was created with a bit of hope that it would rise as much as it should - we had no plain flour so I substituted with oat 'flour' (it's extremely coarse, ground up oats) - and that it would actually cook all the way through. Last time I baked something, my cupcakes ended up burnt on the outside and uncooked inside. So I followed the recipe religiously sans ingredients and wished for the best.

When it came out (for the second time), it smelled so sugary and sweet that my healthy mindset almost flew out the door. I only had half a slice, but it was delicious and sugary and tasted really quite unhealthy but it wasn't even that bad. If you took out the sugar, it would be really quite healthy. But it tasted sooo sugary that my mood perked and I was pretty damn happy for the rest of the day.

Not like I was happy enough that my bread actually cooked through this time, but my mum, my brother and three of mum's friends all liked it, and mum doesn't even like banana, and my brother doesn't eat fruit! Success!! 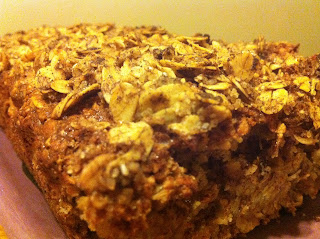 Preheat oven to 180 degrees and line a baking loaf tin or whatever deep dish type of baking utensil you have on hand.
Combine the bananas, egg, milk, oat flour, 1 cup oats, 1/2 cup sugar, 1 tsp cinnamon baking soda and powder in a large bowl and pour it into the baking utensil.
Put the 1/4 cup oats, 1 tbsp sugar, cinnamon and coconut oil in a small bowl and mix to coat the oats with coconut oil and cinnamon. Sprinkle on top of the loaf.
Place the loaf in the oven for 50 mins - 1h 5 mins, or until a skewer comes out mostly clean. It's quite moist so it will stay moist inside. 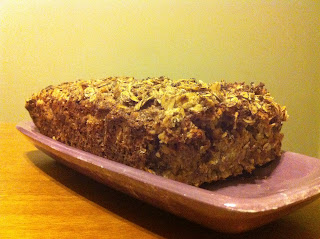