Hey guys! More of a ranty post than a recipe post, but I wanted to put tonight's dinner up :)

So today I finally decided to change my subjects for year 11 and 12, so I strolled into the guy-who's-responsible-for-that-sort-of-stuff's office and asked for the form. But when he asked me what subject I wanted to change to, I told him I wanted to go from chemistry to pdhpe but he was like 'oh you can't do that they're not in the same line so you have to pick from this this or this' so I was like KJRBEIUH BUT I DON'T WANT TO DO MODERN HISTORY OR LEGAL OR THINKING SUBJECTS!! So I calmly accepted the fact that I wasn't going to get my perfect subjects as he wrote down my suggestions. And so I left the room and rushed to my exam I didn't know about... for pdhpe...

I was soo scared that I was going to get a 0 for missing the class I was hoping to swap into (how bad would that look??) but thankfully my pe teacher is a gem and let me do the exam. I wasn't even that late... like 2 minutes...

Anyway, all day I've been looking at my suggestions and asking all my friends what I should do. But there is no way I'm dropping either biology or food tech for pe so my final choice was...

And yet I'm one of the shyest people on the planet. You know what? Who cares! I'm just going to stroll in there and pretend that I'm slightly more confident than I actually am and if people ask me what the hell my body is doing flinging itself across the front of the room, I'm gonna say that SCHOOL IS FOR LEARNING and I need to learn how to fling my body around the room so I don't look like the epitome of tragedy.

Plus I want to be a part time commercial model (yes, models don't all have to be tall and skinny! They can be short and... not skinny like me ;) ) so doing drama would help I guess.

Now time for the recipe, what you've been waiting for!
We had a packet of gnocchi in the fridge that needed using so I wanted to make something not saucy and also healthy and delicious, so I made a massive batch of cauliflower and broccoli rice and made that the bulk of the meal, with a bit of protein and of course, gnocchi. You could certainly add whatever you like to this like beans or cheese or even make it soupy and add some stock or something but the family ate it so obviously it was edible as it was. And change the amounts to your preferences; I just used what we had.

And once again, I forgot to take a photo of the meal before it was gobbled up, so here's the leftovers: 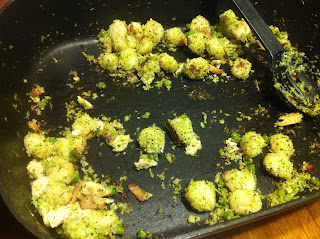 (there was heaps more 'rice' than this but mum and I ate it all :d )

Cook the gnocchi as instructed on the packet (that sounds really industrial; I would've prefered homemade gnocchi, but that's my next challenge :) ), drain and set aside.
Chop the broccoli and cauliflower into small chunks and chuck them in the food processor until they resemble rice, or until they're all minced up and just about to go pulpy.
Melt the coconut oil and butter in a gigantic frypan or dishy thing that'll hold all the stuff you're about to put in it.
Add the bacon and garlic and fry until the bacon is cooked. It'll spit a lot, but let it go.
Add the peas until they've defrosted. If you use fresh peas, add them in the next step.
Add the cauliflower, broccoli and chicken and mix it all in until it's well incorporated. Let it fry for five. (it might be a little dry - if so, just add a teensy bit more coconut oil or butter)
Add the cooked gnoccchi, stir it a little, and keep it all warm in the pan until ready to serve (max 10 mins).
Serve with sesame seeds, grated/crumbled cheese, or whatever you like really :)
Posted by Unknown