When a ferment recipe says to leave a gap at the top of the jar, they don't mean a half a centimetre gap.

It's incredibly humid here so I thought I would ferment a thing or ten while I can get them done quickly. I've been making watermelon and its rind, cucumbers with cumin seeds and cloves (I only discovered the taste of cloves the other night on a Christmas party ham, and I'm still trying to work out how to cook with them), asparagus and radish, and I also made some mango ferments.

Just one mango for now. I sliced him up, slid his cheeks into my French jam jars (there's something I never thought I'd say), added some water and starter from my watermelon syrupy almost-alcohol, and left him there while I had breakfast.

Come the next morning and I came to see if he was ready. His lid was tight so I knew he needed a breath of air so I naively picked him up and unscrewed his lid. PHRFRRFRAAAAGHGHH. I think that's about how it went. It was not a fizzzz, it was not a pop!, it was not a bubble bubble rising rising bubble aaaaand overflooooooww..., it was a full on vomit of mango gunk.

Despite the appealing imagery, I licked my sticky fingers covered in goo. The goo was delicious. Still sweet. I probably should've kept it going another day but it was just so sweet and just enough tang to make it taste fermented and I didn't want it to become alcoholic too... so I rinsed him and popped him in the fridge.

I took the other one and brought him over the sink. I very slowly twisted it half a degree and let out some air. Once it had stopped fizzing I cracked it open a teensy bit more. And again. And again. My fingers were slippery from rinsing them from spew so I grabbed a towel to twist a little bit more. I twisted a little and then I realised I'd gone too far.

Rinsed them off and put the mango in the fridge, only to be taken out half an hour later as a non-jam, non-chutney, some type of fruity topping for my zucchini pancake (I've been having a lot of those lately, with carrot too). 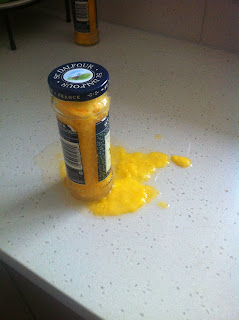 Mango
Water
Starter or a previous batch of fermented fruit or vegetables, optional

Cut up, scoop out, fork out, mash up, or squeeze the mango flesh out of the skin and off the stone. Squeezing the stone helps :) Keep any squares/scoops a uniform size.
Add the mango to a jar that's at least twice as large as the amount of mango that will fit in it, or divide the mango into separate jars.
Add 1 - 3 tbsps starter or liquid/brine from a previous ferment, then fill with water until all the mango is covered.
Add the lid and set aside for 1 - 4 days on the counter, burping when needed.
Posted by Unknown