Today's recipe comes from the wonderful world of Facebook. I was scrolling the other day and I came across a picture that had someone completely obliterating a watermelon, a muscly guy carving out coconut, and a glass with all this glorious stuff in it. I thought it looked pretty delish. It looked it up to see if it was as amazing as it seemed.

The wonderful world wide web told me that this lovely drink was called otai, and is a traditional Tongan and other-Polynesian-island drink. You 'grate' watermelon and/or other tropical fruits like mango or pineapple, add fresh coconut, coconut water, coconut milk or coconut cream, some more water, then pour it into a whole coconut shell - that has a hole in the top - and leave it in cold water or behind a waterfall to let it cool for a few hours (my favourite bit!) 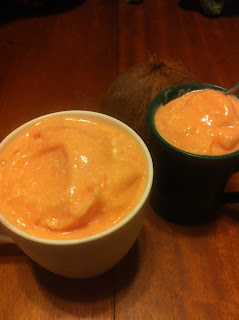 Doesn't that sound like the absolute most annoying drink to make? You have to grate the watermelon, which isn't too hard, but it would take a while, crush up some other fruit, get the meat out of the coconut, pour it into another coconut with a whole in the top and let it cool for a few hours?? Are you kidding? Obviously that stuff has gotta have a load of calories in it for that kind of work! I think that if you made this drink like they do in Tonga, you'd definitely deserve that sugar from the fruit and fat from the coconut more than anything else.

Wikipedia also told me that it's traditionally, traditionally made with ambarella and fresh coconut, and that watermelon, mango and pineapple was introduced, so the Samoans only call ambarella otai 'otai' and every other fruit has its own drink name.

So, once again, my 'traditional' recipe isn't so authentic as it should be.

And then I go one step further.
My version of otai has:
- frozen watermelon instead of grated
- coconut cream instead of the milk, which is more preferred
- no water or ice (because the watermelon's cold itself and I didn't want to dilute it)
- quite a bit of mango

I'm determined to make a proper version one day (read: next summer) and make it properly and chill it in the whole coconut (what a fun day-long project that sounds like! I'd have to spend a day at a waterfall to cool it correctly) and drink it like I deserve it, but for now, I'm making a fattier, cheaper, easier version of it. 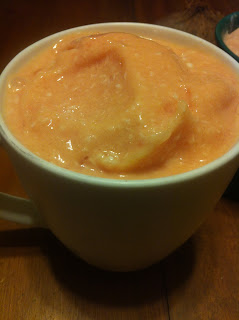 Serves 1 hungry person, or 2 people with other stuff to eat

2 cups frozen watermelon puree (like juice but with the fibre and goodness still in the liquid), pulverisable
3/4 can coconut milk, chilled (so that half is coconut water, but there's some creamy stuff left too)
water, to taste
1 mango cheek, skinned and diced
honey or sweetner, optional (I found a few sites saying that it's traditional to put sugar in, but isn't that what the watermelon's for?)

Pop the ingredients in a blender and blend to thickness/chunkiness liking. (mine liking is obviously thick and icy)
Posted by Unknown