Have you ever seen those paleo (or vegan) cream recipes that use 'whipped coconut cream' instead of dairy cream?

I wanted to try it out, so I got my last can of (what I thought was) coconut cream, put it in the fridge and got the beaters out ready to whip me up some fatty cream.

When I planned for all this, I had a wacky idea that I thought I should try, just because I already had the beaters out and dirty. I grabbed the half avocado I had and had a go at making that into whipped cream as well.
I reckon it could've worked if I bothered with it a bit more. I think that if I puréed it first, it could've gotten fluffy(ish) to some extent. But I just... chopped it in with a spoon and hoped for the best. It also could've worked better if I had lots more avocado to work with, more like a whole reed avocado, instead of the tiny slicing avocado I had.

Back to the beating bowl. I discovered that my coconut cream was actually coconut milk (which meant that it was much more likely to work, aaand it gives me a better base for my recipe tomorrow), scooped some of the top creamy bit into a bowl and whipped it up. It was unsurprisingly quick and identical to normal dairy cream (except for taste obviously). I scraped the bowl and tried the avocado.

Like I said, I scooped chunks of avocado into the bowl and turned the beaters on. I should really think about these things before I do them. Liquid turns to whipped cream, chunks do not. All the beaters did was purée the avocado bits. I tried to keep it going after the purée, but I didn't have enough patience time or 'liquid' to think that it could possibly work. So I scooped that onto my plate and topped both creams with a whole punnet of blueberries and the leftovers of my macadamias. 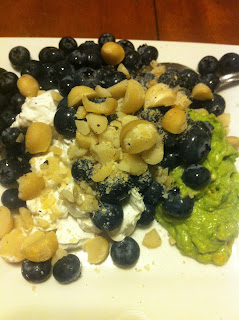 No wonder people love the whole idea of 'berries and cream'. This whipped coconut cream is just like the dairy stuff, but with a tropical twang, which makes it that much cooler.
Posted by Unknown