As a child, one of my most favourite meals was chicken schnitzel. I had it just about every night. I had it so often that mum and dad gave up with the whole flour and egg thing, and skipped just to the breadcrumbing. So then my grandmother's lovingly made, non skimped chicken schnitzel was a million times better. 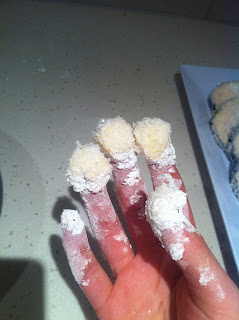 The other day, I had an epiphany for a paleo remake of schnitzel, and I wanted to see if I could remake it. I made up a big batch of chicken tenderloins and an eggplant round (to test it out) and lovingly made my non-skimped, paleo schnitzel.

Afterwards, I laid my big chickeny breast schnitzel and the lone breaded eggplant on a bed of shredded and boiled TO PERFECTION Brussels sprouts (they looked so good that even my brother asked if he could 'try the lettuce') and ladled on some of my LINK slow and perfect meat tomato sauce. And it was DIVINE. It looked like heaven too. It seems to be the best meals I don't take photos of.

So I tried to recreate it with the eggplant. I got an eggplant, sliced it up, salted it, let it sit out for a day and a half (the longer, the better!) and got around to making a big batch of eggplant schnitzel. 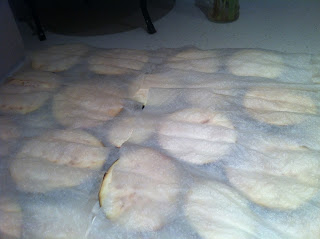 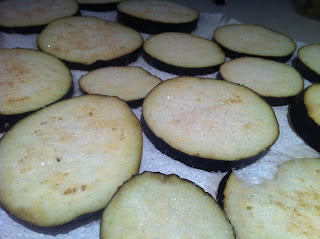 I laid out my bowls of arrowroot, egg and coconut and the dunking commenced. 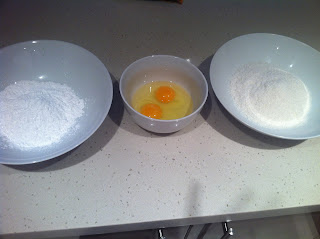 The still-wet eggplant rounds were dusted in probably too much arrowroot... 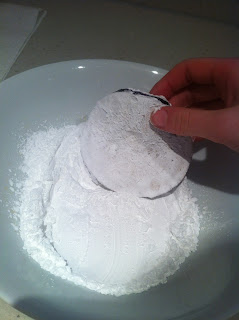 Then covered in egg (sometimes it didn't want to stick)... 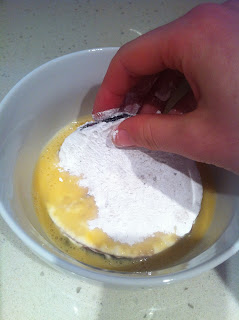 And they were given a coating of finely desiccated coconut to schnitzel them up. 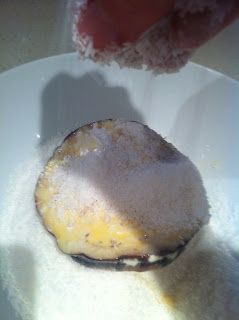 There's my first one. Once I'd made all of them, I glugged out some olive oil (honestly, I suggest using a much more stable oil like tallow or coconut oil, because they ended up tasting very PUFA-y) into two frying pans and plonked them in once the oil was hot. 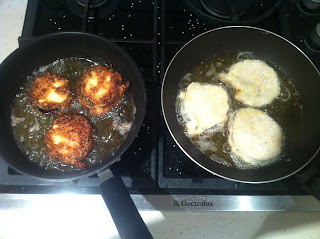 Back to replicating my perfect tomatoy dish that I made last time, I got a ladle and ladled out some of my pumpkin soup and put it in a pot, and then got a ladle of the worst osso buco of my life (osso buco + water = my hopelessly failed attempt at broth, I had no bones available) and popped that in the same pot. Of course, it wouldn't be the same solanine taste (duh, there's no tomatoes in basic pumpkin soup) but I wanted the same sort of rich, thick, vegetable-creamy (you know what I mean?) ladle sauce to spoon over my schnitzel like a parma. I heated it up, tasted it - still tasted boring, but oh well - and poured it lavishly over the breaded eggplant.

The photos accurately depict the meal's tastiness.
Before Sauce: 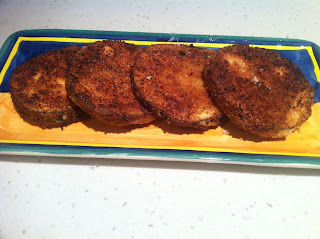 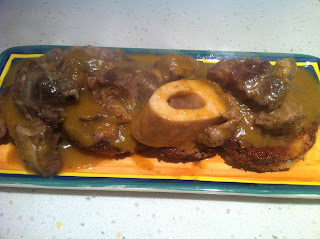 As you can see, the eggplant schnitzel was the ultimate STAR OF THE SHOW and the pumpkin-osso buco-bleugh sauce just ruined it.

You know what also ruined it?

The fact that mum ate the rest of them.

4 chicken breasts (or 2 large eggplants)
2 cups tapioca starch, tapioca flour or arrowroot
3 eggs (you can go with 2 but it's better to have more)
3 - 4 cups finely desiccated coconut
Stable fat, for frying

If using chicken breasts, cut each breast into three or four equally sized sections (about the size of a tenderloin). If using eggplant, cut into rounds, lay on absorbent something and sprinkle with salt. Let the butter juices leach out for at least 30 mins. Pat down with some more, dry absorbent stuff.
Place the tapioca/arrowroot in a bowl, crack the eggs into a separate bowl, and pour the coconut into a third bowl. Whisk the eggs until combined.
Dip the chicken (or eggplant) pieces, one at a time, into the tapioca/arrowroot, covering the piece. Then dip into the egg, covering the piece, and then into the coconut, then place on a separate plate or dish. Continue with the remaining pieces of chicken/eggplant.
Heat up the fat in a deep frypan. Fry each piece in the fat until cooked on one side, then turn and cook on the other side. Take it out once it is golden brown. Repeat with the remaining pieces until all are cooked.
Serve with vegetables, homemade mayo, melted cheese or some delicious sauce (don't ruin it with a bland sauce!)

NB: Once it's cold, the chicken schnitzel goes a little gummy between the chicken and the arrowroot, so I'm yet to work out a substitution - probably coconut flour. In the mean time, just eat it while it's hot! Not that it's incredibly inedible being a little gummy, it just doesn't stick to the chicken as well. 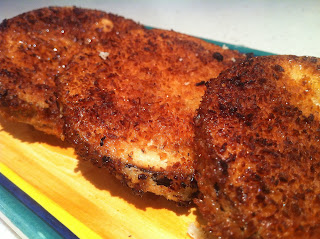